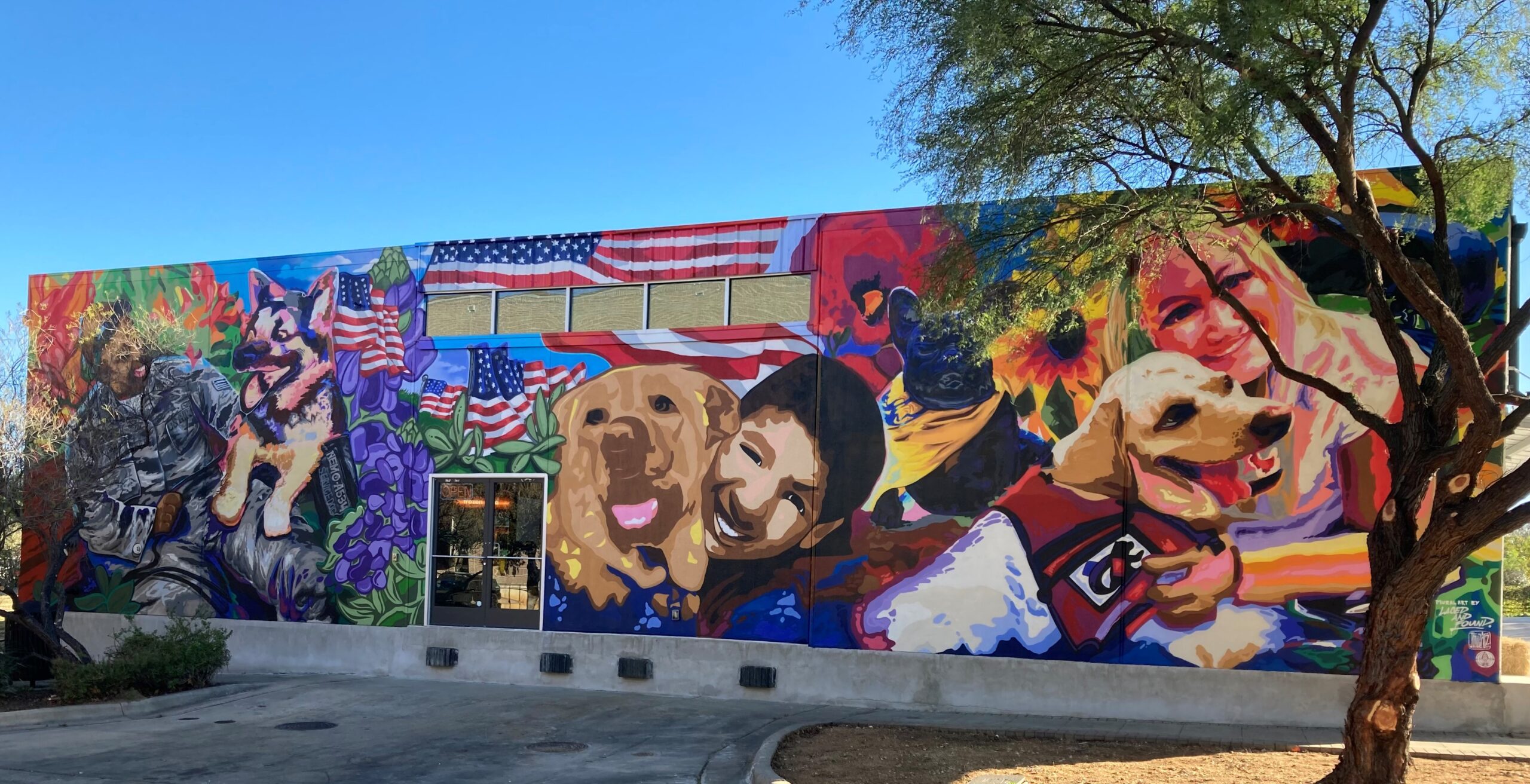 Muralists J. Muzacz and Jay Rivera teamed up to create the public art mural  located at Wag Heaven, 206 West 6th Street #115, that is part of the Healing Arts for Veterans Program. 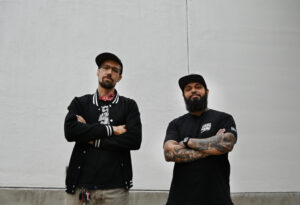 The Arts and Culture Program collaborated with the local pet supply business, Wag Heaven, to create a service-dog themed public art mural to honor our K-9 service heroes while commemorating the Rotary Club of Georgetown’s Field of Honor®, as well as War Dog Hero, Nemo A534 whose memorial is located at Lackland Airforce Base. The mural was installed during the week of Veterans Day and included a community painting event on Veterans Day, November 11th.

Funding for the K9 Heroes Mural at Wag Heaven is provided by Wag Heaven, the National Endowment for the Arts, and the City of Georgetown Arts and Culture Program. 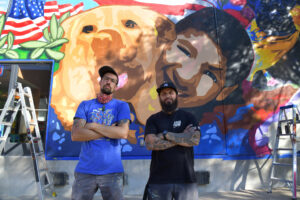 Jay “Areo” Rivera is a Puerto Rican graffiti writer and artist. Born in 1978, he grew up in the Bronx, New York. During the 90’s in the Bronx, graffiti was in heavy rotation and an essential part of hip-hop culture in New York City. Along with tagging, Areo worked on his skills and began painting murals by the age of 16. At 19 he entered the military as an Infantryman and served three tours in Iraq throughout his 18-year career before medically retiring in 2015. Upon his retirement Areo quickly got back into art and began painting canvases. In 2018 he launched Laced and Found, which provides murals, custom artwork, clothing and has future plans of opening an art collective gallery. Since its launch in February of 2018 Laced and Found has painted over 230 projects including murals and custom work. All of the work done by Jay “Areo” Rivera is done with spray paint; no brushes, markers or any other tools are used for his murals, keeping true to the style and culture of a graffiti artist. Please click here to visit Jay Rivera’s website.

J Muzacz is no stranger to Georgetown’s public art scene!  His most recent work includes the mosaic tile mural in the Georgetown Municipal Court Lobby entitled “El Arbol” (The Tree). Houston-born J Muzacz was recently honored by the Texas Commission on the Arts by inclusion in the 2020-2022 Texas Touring Roster. Muzacz has 15 years of experience painting large-scale murals for both public and private clients. He is also an educator and author/illustrator with two books to his credit, both bilingual in English and Japanese, from his time teaching overseas in Japan. He has lived and worked in Korea, Taiwan, Vietnam, Australia and New Zealand, having painted numerous notable murals abroad, one of which found its way into a Samsung commercial, as well as the cover of Hong Kong Airlines magazine. Connecting his passions for art and travel, J is eager to tour and engage with schools and communities all over the state of Texas, making and facilitating mural and mosaic art that uplifts, educates, and inspires people of all ages for years to come. Recently J has been commissioned across the country for commercial murals in Florida, California, Colorado, and Pennsylvania. He has also been invited to festivals as a featured artist in Austin, Houston, and Flint, Michigan, just to name a few. Please click here.